The Perfumed Baker’s dozen: Thirteen roses for anyone feeling unlucky in love If a Dandy can’t love himself who the devil’s going to love a Dandy?

And yet, as souls sleep in the East, the public houses of London call last orders and people all over the Americas prepare for home time there will be Dandies and Dandiladies who are unhappy, unsatisfied and frankly insatiable.

But why? I hear you cry.

Well, dear fiends, they have been unlucky in love.

They may be with many or entirely without lovers. Indeed they may enjoy lovers and love of the highest order. That is not the kernel of their disappointment. They are be-fretted Dearhearts for they have not had their olfactory needs met.

Their noses have been ignominiously ignored. Or, worse still insulted with silly low grade scents.

Fear not for The Perfumed Dandy is on hand with a hastily assembled receipt for aromatically induced happiness. What follows is a list of 13 – oh yes, a Baker’s Dozen, one above the average – fine rose scents both reasonable and tres cher that in this Dandy’s view can be worn equally as well by Man or Woman.

So my pink petals of perfumed petulance, if you seek solace search no more. Consult the The Perfumed Dandy‘s list and on way to habitation tonight or as soon as merchant opens in the morning and indulge yourself in the gift you truly deserved.

For, to paraphrase that green-carnationed acquaintance of mine ‘everything in life should be resisted except temptation’.

Do not recoil in horror my Dandyphiles. For on closer examination this ages old nearly-but-not-No5 is actually a stalwart of the scented community. Her brusque manner with a blunt waft of aldehydes at the start set to one side, she warms into a smiling sandalwood and rose affair with a warm heart. Endings with her are all afternoon teas and vanilla biscuits.

If you really want to do a dowager, the way to play the grande dame here is to oil up with the body lotion, powder down with the talcum, give yourself a whizz of body mist all before applying perfumed creme behind the ears and spraying on the parfum de toilette. And given the prices being charged all this can be achieved for the same price as two goes on the pump with an Amouage.

The Dandy can picture the marketing meeting. Take the Kelly bag: iconic, perennially fascinating, occasionally totally on trend. Wheel out Caleche, that old thin lizard of an aldehyde, and bring them together in’a pink liquid’ and a rather gimmicky bottle with trinket catch. Surely we have a licence to print money, no?

Well they didn’t reckon on two things: one, the fickleness of the young female public who never really seem to have gone with the concept and, two, Jean-Claude Ellena’s capacity to surprise with even the dullest of briefs.

What we have here is a sparse airy rose floral paired with a pared down version of Hermes signature leather.

Do not let the sickly citrus at the beginning fool you, this a complex and competitive scent suitable for both sexes.

3. Potrait of a Lady by Frederic Malle

Not much to say here: a rose bush, a rose garden, acres of roses, a whole Royal Park of the beautiful things.

A little smoke, a touch of patchouli, subtle spice and sharp summer fruits.

Simple? Yes. Well? No. Its perfect execution just makes it seem so.

One of the most complex mass market ‘male’ scents out there that totally belies this house’s somewhat unfair staid image.

South Asian spices and pepper come together to (almost) form an analogue of an oud that introduces a perfectly cultivated but intentionally imperfect rose that starts cleanly and then decays over a long summer of a night. It’s grand and grand on everyone.

This crew started making soaps over two centuries ago and along the way they picked up powders and lotions and ultimately scents. First in their signature lavender range and now in around a dozen or more faux ‘soliflores’.

The English Rose is just lovely, simple and honest and honestly flower-like. There are geraniums, some white flowers and the obligatory powdery musk here, but they do little or nothing to detract from the main event.

You will need to desperately over apply, or double up on products – the assumption one assumes – to make any real impact, but at these prices who can complain. Great for bed and even better for layering particularly with spicy woods for men.

Oh my goodness gracious. If ever there was a contrast with the Diary of an Edwardian Lady politesse above, this is it.

As dark, dank, skanky and utterly animalic a floral scent as you’re ever likely to find these days.

There’s a beautiful, slightly antisceptic rose at the centre of this but you’ll have to fight the hoard of mediaeval warriors and mythical beasts out the way to get at it.

Triumphant. A tragedy that it seems to be being or has been discontinued.

Made for women the Dandy is reliably informed that, from the start, this has always been appropriated by men.

What to say – the souk, the strange wood and woodsmoke, the tannery, the mysterious man, the sweat, the stolen kisses.

A Persian epic of a perfume that starts all Oud and then goes gooey resinous rose that washes itself clean with time.

Incredible longevity on the Dandy‘s ‘haven’t eaten for a week’ hungry skin.

Why, on asks, do houses even bother denoting pretend genders on these high end niche offerings?

It’s all in the name. If one wants the royalty of rose scents this is just the ticket.

Roses, honey, honey bees, some of the nice and not so nice things they land on.

What’s all that jasmine queen of florals rose king of florals stuff again? Look, to the Dandy‘s mind you don’t have to be royal to wear this ergo…

Bizarre imported rosebush in a bottle. As if someone tried to compress an entire European attempt at an oriental garden into a scent and then it all just went nicely horribly wrong with everything except the roses and a stray ylang ylang escaping.

This always makes the Dandy think of the far east between the wars, of desperate and disfunctional diplomats – second consuls in unhappy marriages pretending at Christmas in ninety percent humidity.

One of the best Caron perfumes around and the perfect expression of that house’s central accord.

The Dandy wore this festively this holiday and received more compliments on his smell than he can remember in a good many a year.

Stepping forward all dapper in an immaculately tied dickie bow he’s an upfront and honest Euro-centric attempt at a fake oriental rose. The whole effect actually does resemble something of the smell of a better Turkish bath – including the detergent and medicinal notes.

This is potent and potently floral stuff and insofar as the Dandy has signatures this is one of his marques. However, it’s easy to see both men and women shying away from it’s antique intensity while others just as gladly embrace it, tweeds, flannels and all.

The Dandy adores the stuff.

Only ever to be worn with confidence and a good dash of insouciance.

On reflection, I think the Dandy far prefer’s Woman to Man in this case, though both are very much to be sniffed at. A surprising choice many of you may feel as rose is buried down beneath a pile of stronger notes, most notable spices, leather and smoke. However, for the Dandy at least, our flower of the day comes riding through on a jasmine white charger to steal the show in the later stages of the scent.

When she does she’s just breathtaking.

This house as a whole draws from an ancient tradition of perfumery that is not nearly as gender specific as today’s. As such the Dandy takes what he can from where he can.

Indeed given the tres cher nature of things in these parts all crumbs from the table are gratefully received.

A personal hobby horse of the Dandy‘s and one he is slightly affeard to share with all and sundry. But, as I am amongst friends, and on condition you will spread the word no further… This is a masterpiece.

The Dandy‘s view is that masterpieces require no introduction and should be allowed to reveal themselves to you in their own time.

As such an uncharacteristic silence will now fall.

13. The Noble Rose of Afghanistan by The 7 Virtues

To be broken only with a fanfare of hope.

The Dandy‘s final fragrance is the result of a truly brave enterprise. A daring Canadian entrepreneur decided for both personal and professional reasons to Make Perfume Not War. She applies this dictum quite literally.

A tiny house by global standards, The 7 virtues operates on the basis of working with local producers in war torn and disaster stricken regions around the world to source ingredients and on the principle of paying above market rates to stimulate the local economy and, in the case of Afghanistan, dissuade farmers from other far less benign cash crops.

Do not be deceived, however, the purchase of this perfume on your part is not an act of charity for it is truly a noble scent.

Like much of the nobiltiy it makes every attempt to keep its blood line clean, so this is not a convoluted or over complex rose in any way.

What it does it to be a pure rose perfume and that it does excellently.

And what better way to conclude, dear friends, than with a fragrance not only to console your lovelorn hearts but through which to communicate your love out to the world.

In matters of the heart, so the Dandy believes, it is best to both give and receive. 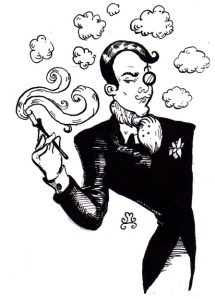 27 responses to “The Perfumed Baker’s dozen: Thirteen roses for anyone feeling unlucky in love ”