So Dear Friends, Fellow Travellers even, the momentous start to our journey and what better port of call could there be on this St Valentine’s Day than the city of love itself: Paris.

The place where I first lost my heart to women’s perfume.

Our destination? The Atelier of Madame Gres.

It was his first time in France and in love.

And she? She was the perfect Parisienne. For him at least, for that moment at least.

In knee length boots and battered Bader-Meinhoff leather coat, belted tight at the waist in a bow, she was the embodiment of lived in Left Bank chic.

A brunette, she blew the tobacco’ed air of Gitanes Legeres Blondes into his face and ruffled his hair with lacquered fingernails.

She turned cigarette packets between her fingers in a way she joked made the lady dance. She swore she would stiffly sway through a flamenco for him one day. Though they both knew she would not.

And all the time the smell of polish and hairspray and smoke hung around her like an expectant cloud waiting to take her back to heaven. From where he fancied she had come.

She was of vintage stock. A ’68 perhaps with a tang of mossy cold stone cobbles ripped from the rues about her, the taint of blood in her red hair hue. Or perhaps earlier still, from a time of existential post war cafe culture chatter.

Either way she was undoubtedly chateau Boulevard St Germain. 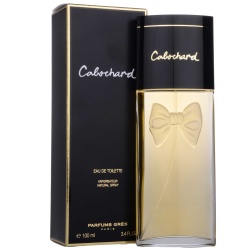 Where others saw signs of age and worn away good looks he perceived only beauty braced across amazing bone structure and he happily played attendant to her vast intelligence.

That summer he took the metro each day to the Bois to gather her wild geraniums from its faux fields. Occasionally he would risk a rose robbed from the Jardins du Luxembourg.

But he knew his blooms could not buy her fidelity, he knew he could not keep her.

Faithful only to herself and her own sense of self possession, she disappeared in furious flurry of smoke just as she had arrived, leaving only the amber glow of the outline of where she had once stood.

Today he sees the City of Lights through older, wearier eyes.

Yes there are headstrong young women everywhere he looks, yet none have the selfish generosity of his lady of the leather, lacquer and undanced flamenco.

How he misses her.

Cabochard by Gres is not what she was. Of that there can be no denying.

Today though still beautiful she has the bleak, too bony and hollow-eyed look and feel of a fashion model on the brink of despair.

But catch examples of her in her heyday and a different woman awaits you.

The ultimate in leather clad confidence, she is the chemical queen always on the lookout for a male sidekick. But for all this flint and bone oakmoss structure, the old girl could put on the curvaceous when she needed to: summoning up concupiscent curls of rose, orris root and sage seemingly on demand.

These have largely been withered away to today’s etiolated example that can call only on watered down jasmine and synthetic, if satisfying, amber for strength.

Do not dismiss the latest headstrong girl because she’s still tougher than most men in the room. It’s just unfortunate she’s not the force of nature her foremother was.

But we will always have the memories.

We will always have Paris…. and Paris belongs to all of us, men and women alike.