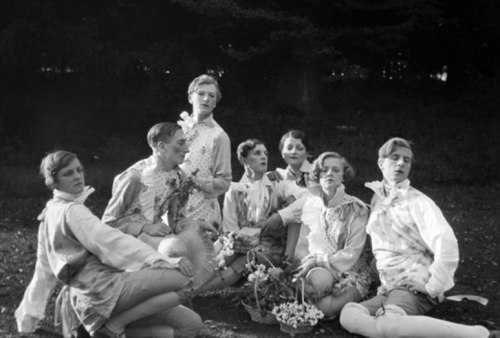 Last night at the fancy dress ball you were so sure he was a woman.

Amongst all the counterfeit countesses and rugby players passing themselves off as runaway Romanov nieces, it was he alone who had you convinced he was a her.

This Empress Eugenie, so you thought, was the one exquisite item that had come as her own sex.

Set apart from all the debutantes dressed as racing car drivers and retired generals, ‘she’ alone, you foolishly swooned, had elected to don a dress.

You went so far as to ignore the Seville and bitter orange cologne ‘she’ wore and concentrated instead on the delicate dancer’s arms.

Focussed on the slight, slightly coquettish tilt of the head that sent long blond hair to one side and on the skin with the sheen you spent the evening imagining was smooth and soft to the touch.

The same skin you see now across his boy’s flat chest as he is poised to take a dive into the blue of the swimming pool.

A splash. Then a slender shadow the colour of lavender makes its way underwater to where you are wading just out of your depth.

He emerges right next to you, smiles with those same imperiously perfect teeth and brushes the same blond hair, now slick with water, out of his eyes.

Clear, bright, unembarrassed eyes that look straight at and in to you.

You catch the faintest remnant of that citrus smell and redden at the recollection of what you rather had not passed between you.

With a laugh he disappears into the depths again.

You struggle to the side and pull yourself clear of the water, the heat of shame cooled to goose pimples on your flesh by late Spring’s breezes.

You hear his laughter behind you and then some words in that courtly high-pitched French you listened to all last night.

Walking away towards the trees where you can change out of sight, you turn to look back.

You study the group of people by the water’s edge but cannot pick his face out amongst them.

You find yourself breathing deeply and wondering whether this short meeting is all you will ever see of him.

You wonder whether this is what you want.

Eau de Cologne Imperiale is Guerlain at its most gamine.

It is a fragrance as fleeting as the androgynous beauty of youth.

It may have seen more than one hundred and fifty years in production, but on the skin it is the matter of a mere hour or two at most.

This is a sliver of citrus history, an elusive and strangely sensual scent that one must allow to slip through one’s fingers, time and time again.

Taken together the notes are akin to a nursery rhyme in their simplicity: oranges and lemons, bergamot, neroli, lavender, some cedar and a little sweetness from the tonka bean.

The effect is at once refreshing and regal, partly from the perfume, partly one supposes from the idea of partaking in a piece of the past.

Eau de Cologne Imperiale is as much a ritual as a fragrance, like bathing, its effects are ephemeral yet enlivening.

There is no better way to free up body and mind for the complexities of the day ahead.

It seems absurd to talk of men and women so far as this perfume is concerned, it was made for both an Empress and her Emperor.