The seemingly endless curve of the circular exterior wall of the Hirshhorn Museum is broken here and there with radial partitions, creating segment-like rooms that conceal surprises.

Entering one such space I find myself face to face with the grand master of Pop Art, a floating torso against a black void rendered in brilliant white and lurid pink paint Andy Warhol appears a dark angel of death.

Staring into his grey eyes it is impossible to put aside thoughts of his technicolor on steroid screen prints of icons from Queen Elizabeth to Elizabeth Taylor by way of Liza Minelli and David Bowie.

But what perfume would the world’s shyest egomaniac wear?

Of course Bond No 9 have asserted their retrospective right to him releasing a whole range of fragrances alluding to his life, his work, his NYC, none of which, despite their likability, alights on the spirit or the sensibility of the man.

Parfums Andy Warhol too for all their blunt use of their namesake’s most famous works as product packaging, miss the point.

After all Andy preferred to turn packaging into art not vice versa.

So I will choose instead a fragrance I have read filled the air at Studio 54, the New York club that I always feel, after the Factory, to be the master’s natural habitat.

Halston for Woman as was: it goes by different names today and has been endlessly diluted and the composition occasionally disturbed.

Yet in every variation from the genius of the original to the bordering on generic of the contemporary, this is the most bone dry of floral chypres ever to have donned a gold lamme jump suit and stack heals to grace an underlit dancefloor.

Are we still in Washington? Is that Bianca Jagger on a horse?

I am sure if music had started to play like Pavlov’s discotheque dog I would have begun to sway rythmically and to worry about last dances, looking cool and getting all my apparel back at the coat check.

As we leave the Hirshhorn, the stuff of coat check dreams appears… 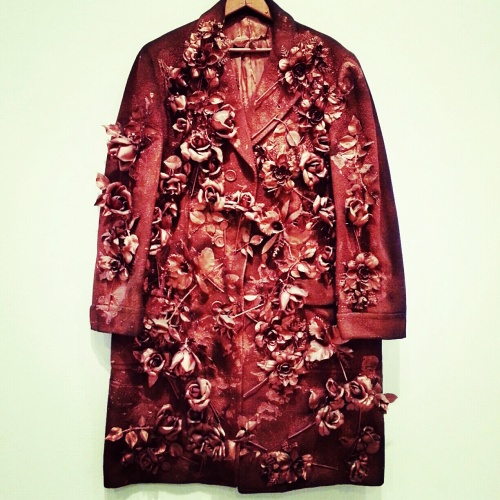 How I wish I could have taken home from any club of any sort at any time Yayoi Kusama‘s bronzed, rose embroidered manteau, rather than my own affair, no matter how dapper it might have been.

It’s meticulous craftsmanship and eloquent opulence call for a powerfully elegant and self-possessed perfume to go with it.

But reflecting on Kusama’s troubled existence, an uncalm rose seems the only thing, and the medieval splendour of Paco Rabanne’s la Nuit the only one that could possibly do this warrior of the heart’s armour justice.

Outside the air has warmed to an improbable early afternoon high of near ninety degrees.

Of course the logical thing would have been to seek out air conditioning and art once again, but mad dogs and Welsh men go out in the midday sun and so we amble on to the most unlooked for treasure of our trip.

Tucked away in a corner at The Capitol Hill end of The National Mall, The National Botanical Garden is a diminutive delight both inside and out its ornamental glasshouses.

Here plants unfamiliar and familiar-looking but with new and unfamiliar names jostle for our attention in a ready made riot of colours and non-colours. 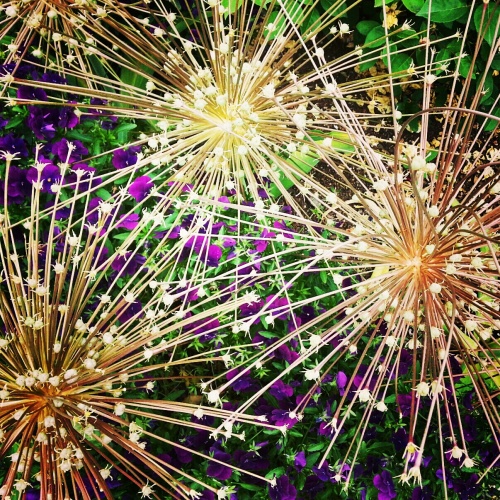 Who knew grey petals could be so beautiful?

One plot of botanical beauties has me rhapsodising once again on space travel, for surely they cannot be of this world… 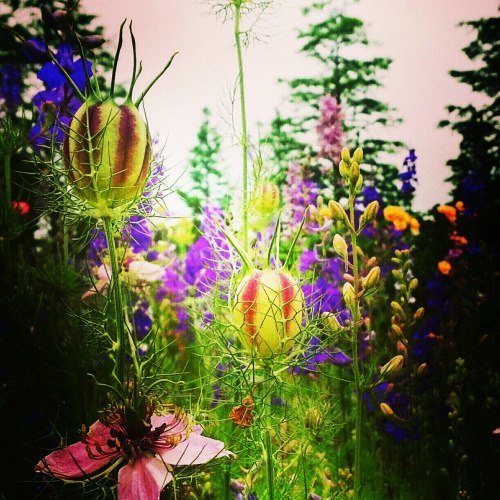 Their elongated alien forms exploding here and there into fronds and antenna-like extrusions are the stuff of science fiction fantasy, and yet they sit here quite happily before me bustling up against one another in the breeze in their busy bed.

A now nearly lost vision of the future from a point some point in the middle part of the last century, it is the perfect scent to accompany these tiny Trifids, who sadly have no smell to call their own.

Looking above the flowers and into the distance, the most unusual of all the domes that surmount this city comes into sight.

Like a parliament of an ancient nation or world, the organic form of the angle avoiding National Museum of the American Indian is as inviting and enveloping as a mother’s arms.

Walking towards the sunshine the smell of woodsmoke is on my mind.